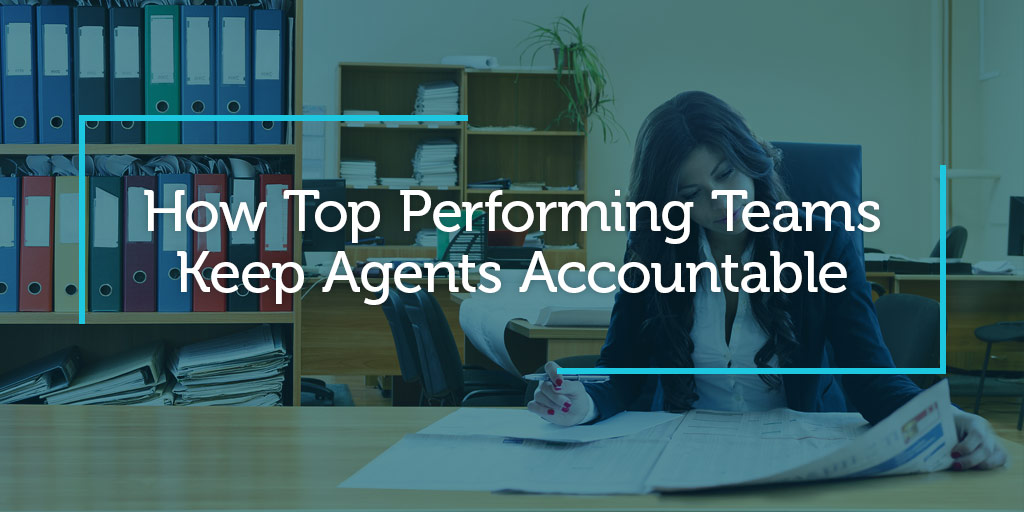 Click here to see how Follow Up Boss can help you increase transparency into your agent’s activity and performance, so you can hold them accountable.

How accountable is your real estate team?

One of the stand-out features of top-performing real estate teams lies in their ability to promote accountability among team members. Agents who are held accountable tend work more consistently well and keep the wheels of your business greased.

That’s not to say that less accountability automatically means people aren’t doing their best work; for the most part, people do want to do well. However, in an environment of high accountability, they tend to better equipped to perform well through regular feedback.

So what are the vital ingredients? How do top performing teams keep their agents accountable?

If you raise the idea of a “culture of accountability”, many people will picture something unpleasant, perhaps involving micro-managing or brandishing “the big stick.”

Perception will lie with how you present the idea however; if your main motivation is seen to be to boost team performance and share in more successes together, it’s a much more attractive proposition than the thought of facing “the inquisition” every week.

Of course you should be checking in with agents, finding out where they’re at and questioning further if things haven’t progressed or if to-dos haven’t been done, but the kind of culture where employees are left cowering because they’re being “policed” by the boss is not the kind which leads to high productivity.

Top performing agencies tend to check in with their agents daily, be open about where everyone is (for example, by having names with numbers on a board) and encourage their members to come forward early with any questions or issues.

The emphasis tends to very much be on performance and productivity, how to make improvements and what can be done to help out anyone on the team who needs it. While individuals make commissions, it’s the performance of the team as a whole which dictates the success of the business, and every team member is invested in the business being successful.

When team members see this kind of example from management, it tends to create an environment which nurtures a high-performing team.

There is a strong connection between peer accountability and team performance, as discussed in research by Harvard Business Review.

Here is what they found:

Actually, this sounds great, doesn’t it? If your team members are holding each other accountable, there is much less need for you to step in as the manager to sort things out. How do teams get to this magical place?

According to the Harvard Business Review Study, it takes the following actions:

Where does this leave your role as a manager?

“The role of the boss should not be to settle problems or constantly monitor your team, it should be to create a team culture where peers address concerns immediately, directly and respectfully with each other. Yes, this takes time up front. But the return on investment happens fast as you regain lost time and see problems solved both better and faster.”

There’s a well-known saying “what gets measured, gets managed” which outlines well the importance of goal-setting in your real estate team.

If you don’t have specific goals to be tracking, what are you holding your team accountable for? Every successful real estate team sets goals. In fact, one of the “secrets” of the top earners in real estate tends to be writing goals down and regularly visiting them.

Top performing teams set goals at all levels: for basic service level agreements, for individual expectations and results, and for team results as a whole.

The goals of top performers are SMART: Specific, Measurable, Achievable, Relevant and Time-Bound. There is no sense in setting fluffy goals about “closing more sales” or “contacting more leads.” How many more sales will be closed and by when? How many more leads will be contacted and how quickly will they be contacted from the time they expressed interest?

If you would like your agency to emulate the success of the top performers, then have everyone write down goals and use them as a yardstick for your conversations with them. If the agent did X and Y today, how are those things directly related to achieving one or more of their goals?

As an owner or manager, you need to ensure that you have good oversight of what’s happening in your agency and that nothing is out of your view. It tends to be those things that we have no idea about that end up coming back to bite in some form.

Having transparency in your business allows you to be a better manager by understanding your team and its inner-workings as well as staying on top of activity in the business. This doesn’t mean you need to be doing everything or have a finger in every pie, so to speak, but you definitely should be communicating frequently and have oversight of who’s doing what, where and when.

It’s hard to hold agents accountable if you don’t know the half of what they’re doing, so make oversight a priority in your business. The key to doing it well lies not in micro-managing, but in getting regular updates from your team members as to where they’re at. You want your agents to feel the autonomy that they need to be confident in their jobs, but not that they can “drop off the radar” in any way.

Another feature which top performing teams utilize well in keeping agents accountable is to have effective tracking systems in place.

These could be simple, such as the old-fashioned spreadsheet or the numbers updated on the whiteboard, but most acknowledge that investing in good CRM software has made a big difference to their teams.

Putting the right software in place allows you to track the important things from the beginning – the path of the customer with your agency. After all, your success begins and ends with the customer as your firm wouldn’t be in business without them.

The best CRM software has the accountability features you need with agents and allows you to track communications (both between you and the agent, and the agent and the client). It also gives you real data such as how long it took an agent to get in touch with a lead, when they spoke and how they have communicated. This provides you with enough true information to assist with holding agents accountable, as well as comparing how your team members work.

Follow Up Boss is a CRM for real estate teams which answers all of these needs.

Keeping individual agents accountable is one of the “secrets” of top performing real estate teams. While accountability can have negative connotations for some, the teams which have done it right have embraced it as an integral part of their culture.

When accountability becomes engrained in the culture of an organization, the boss isn’t required to be constantly monitoring, because team members hold each other accountable. In real estate this is important – every member of your team should be invested in its success.

As tools for assisting with accountability, the high achievers use appropriate goal setting, tracking and transparency to ensure that standards are derived and upheld.

It may sound like a fair bit of work if your team isn’t already at the stage of having a “culture” of accountability, but it will be worth it in the end.

Are You Recruiting the Right Real Estate Agents? Experts Share Their Best Strategies

Entrepreneurial Operating System: What Is It? And How to Use It to Scale Your Real Estate Business