How adding an ISA Quadrupled Online Lead Conversions: An Interview with Preston Guyton 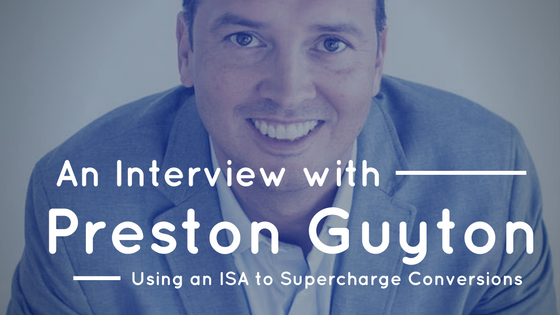 Preston Guyton has been involved in real estate for a long time. He has seen the ups and the downs but always stayed the course and has built a highly successful company.

Guyton founded his company CRG in 2010, and for the first few years, the company was primarily focused on design, construction, and getting referrals from other realtors. “We didn’t really have much of a general brokerage side of our company at the beginning,” Guyton says. “I was concerned that if I also had general real estate agents that I wouldn’t get the referrals from outside realtors.

But four years later with both the company and the economy growing CRG widened their scope to include more general brokerage.

When Guyton and his team returned from the REW Summit in Nashville last year they were getting plenty of leads but the conversion results were disappointing. They were getting anywhere from 300–500 leads in a typical month but experiencing less than 1% conversion from the site.

“We had all those leads coming in,” Guyton says. “But they just weren’t converting.”

It was at that point that Guyton had his ‘light bulb moment’ and decided to look into hiring an agent for an ISA role.

Interviews began in August, and by the holidays CRG had a new the lead conversion agent, Rainbow Russell. Russell’s experience included marketing, operations, and residential management, so she was able to dive right into the new role of Customer Relationship Manager.

These days, the 15-agent team at CRG is handling closer to 900 leads a month.

We asked Guyton about adopting the new ISA system, their drip campaign, and the secret to their pay-per-click success.

What did your process look like before you had the ISA?

“It was basically on a rotation, and they would go to individual agents. We were relying on the agents to follow up, keep up with them, call them, continue to call them, and continue to chase them but the results just weren’t there.”

Were you finding the challenge was getting the agents to do more of the follow-up? Where were the breakdowns happening?

“They said they were doing follow up, but they weren’t documenting it. Now we’re logging everything. We’re slowly transitioning where they’re putting everything into Follow Up Boss.”

Can you tell me a bit more about how you structure comp? What’s a good structure for someone filling an ISA role?

“Our company’s a little bit different. If it’s a development property or it’s a spec house we built, Rainbow is actually the co-listing agent for me on any company owned properties. She gets a quarter of one percent of that.”

“Then what we do, instead of trying to break it down — because she’s basically also helping to manage and train the realtors — she gets four percent of all the commission that comes into the company. Then she’s salary based as well.”

That’s a different structure than what I’ve heard before.

“Yeah. But we’re getting close to 900 leads a month now. There’s no way one person could handle that all themselves. So we’ve brought on a first-call agent who gets one percent of the four percent, based on what they convert. They’re also salary based.”

“The good thing about that is that we can grow. Say we’re getting 1,500 leads a month or 2,000 leads a month, we can bring on more first-call agents and it’s not really costing us any more money other than a salary.”

“The first-call agent is doing the initial six calls and then setting up a saved search for every lead that comes in the door. Then, once they set up an appointment or speak to somebody, they’ll set an appointment with Rainbow.”

“Rainbow does more of the nurturing. When she arrives in the morning she calls the leads from the night before and sets up saved searches. Then she calls them as they come in throughout the day. In the time periods when she has free time, she’ll go back and call the leads that she called the day before to finish up the six calls.”

“Six calls in two days is what we do, leaving a message on the fifth call and then calling one more time.”

What happens to the lead after that?

“In Follow Up Boss, we have an action plan set up that sends a text message right away and it sends emails. It sends the message to make a call as well. From the very beginning, they all get that. If speak to them, then we pause that action plan, because then we’ll get the information from them on what they’re searching for and what they’re looking for.”

Obviously, you’ve placed a heavy emphasis on the calling side, but what about other channels like text and email?

“We also get responses to the texts quite a bit. But we didn’t just take an autoresponder template — ours is more geared to our business and what we do.”

“We’ve implemented a lot of quick, short emails. We get a lot of responses to that. We got away from writing these long emails that nobody ever reads. What we’re getting a lot of success with is the shorter emails, more of a just-checking-in type thing.”

“The other one we get good responses from is one from me that says, “Hey, if you have any questions for our president, he takes a real hands-on approach, would you like to schedule a meeting or a call with him?” We get a good response to that one as well.”

How does your drip campaign run?

At what volume did you decide that it was time to create a second ISA role?

“We were getting 70–80 leads in a weekend. I just looked at the numbers, the amount of time Rainbow was making calls, and the sheer volume of it. If we’re doing, say, 25 leads on average a day based on the system, that’s about a 125 calls a day in itself. It was just too much for one person to handle.”

How has hiring two ISAs impacted your conversion rate? What does that look like now?

“You need a full year or 18 months of data to really get a good number. But I will say that as of April, we’d already closed more website leads than we did all of 2015.”

For the nurture side of things, how does Rainbow prioritize who she’s calling in that group?

Would you say having these ISAs in place is the difference between a moderately profitable online lead generation operation and something that’s generating three and four times your spend?

“Yeah, it is. One of the things, too, is ensuring that your website’s set up for a good conversion. Like forced registration — it doesn’t make sense not to do that. To spend money on pay per click and then you’re basically letting people look at listings without registering. I’ve done it several times; I’ve taken forced registration off over the years just to see. It’s 10% of what you’d get with forced.”

What about your pay-per-click strategy?

“I see a lot of people, and I don’t understand it, they’re doing pay-per-click and they’re not really following the conversion. They’re just wasting money because they’re depending on agents to close deals. I don’t think pay-per-click works if you do it that way. It’s too hard to keep up.”

“For us, the system really is paying off: I know it’s X amount of dollars for a pay-per-click lead, and out of 100 leads, we’re closing five. As we bring in more agents, it wouldn’t be a big deal to ramp up the pay per click because I know we’ll be able to get so many closings on average and I know it’s costing me X amount of dollars.”

Tell me what’s next. What are the next steps for growth?

Any last advice for companies considering a system like yours?