Beyond the Buzz: The Real Impact of Blockchain Technology on Real Estate 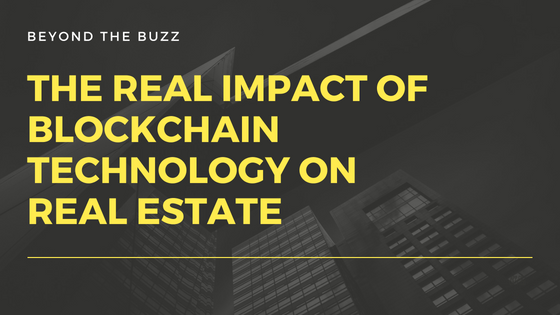 Is “blockchain” just a buzzword?

The temptation to see it that way is strong. After all, it wasn’t too long ago everyone was stacking cans of baked beans in their basement ahead of the of the Y2K “apocalypse”.

Tech comes and goes, and so do the hype cycles that come with it. Plus, with AI, VR and the other techie acronyms to keep up with, it’s only natural to wonder which ones are actually worth your time. So, should you take a minute to learn about blockchain?

The answer to that is yes.

Despite the doubters and skeptics, the global blockchain market is already big — very big. In fact, it’s predicted to reach $2.3 billion by 2021. Though much of the hype about blockchain replacing real estate agents is definitely exaggerated (more on that in a minute), a market that size is bound to have an impact.

Here’s a complete update on the latest developments in the blockchain and the impact on real estate.

What is blockchain technology? (And all that other stuff that comes with it?)

The blockchain has been compared to the internet in its earliest days, mostly because of how wide-reaching and impactful — yet completely misunderstood — it is.

We like this straightforward definition from Mark Zilbert, Executive Vice President at Brown Harris Stevens Miami:

“In its most simple sense, the blockchain is a series of computers (thousands to potentially millions of them) that each keep the same record of an event or transaction in a ledger that is open to the public. Each record is encrypted, and the ledger is virtually hack-proof. Since all these computers see the same thing, they offer consensus that the recorded event or transaction is valid. The most important value of the blockchain is that it allows two or more parties to interact with, say, a financial transaction, with no middleman.”

That can sound a little scary at first read, but only if you think of yourself as a “middleman”.

In his excellent explanatory article for Forbes, Mark breaks down the impact of blockchain technology for real estate agents, “Real estate professionals will continue to thrive in the era of the blockchain. The advice, knowledge and hand-holding of real estate professionals will always be an important part of a buyer or seller’s process. However, the handling of money and transactions will inevitably change, and that change is already underway.”

That’s right. In case you haven’t heard, there have already been plenty of examples homebuyers purchasing properties with bitcoin (though at the moment, this is simply being transferred back into cash).

Which brings us to our next blockchain-tech term, cryptocurrency.

As the name implies, a cryptocurrency is a digital asset.

It’s an application of the blockchain. For years, the idea of using cryptocurrencies like Bitcoin without any intervention from a bank or other financial intermediary was seen as totally “out there”. Now, you can’t take three steps to left without running into someone who’s investing in the stuff.

As of today, the top 3 cryptocurrencies are:

Great. Now that we’re clear (or at least, clearer) on what the blockchain is, let’s take a closer look at how it can transform the real estate industry.

No matter how hard you champion for your clients, you’ve got to admit, the real estate process is anything but simple.

There is a ton of time, paperwork and of course, money that goes into managing a real estate transaction. The regulatory, financial compliance and admin burden is a headache and can sometimes add way too many hours (or dollars) to the deal in question.

Even if you have the best transaction manager in the world, you’ve got to admit there are plenty of places in the industry where a little disruption wouldn’t be such a bad thing. Take, for example, the fact that despite 51% of homes purchased in 2017 were found online, many landlords still want a check in the mail.

This is where blockchain works its magic.

Here are some of the latest trends in blockchain that are already making a mark on the real estate industry.

Experts predict that the future of real-world assets and ETFs is “tokenization”. This is where assets are “digitized” into tokens on the blockchain, enabling buyers and sellers to trade “units” in real estate directly between each other online.

Tokenization is the aspect of blockchain technology that has perhaps the biggest potential for taking the admin pain out of the real estate transaction process. “We need a better way to transact and own real estate. And today’s existing models have typically not allowed that level of access…Tokens, or digital shares, do an amazing job of not only allowing asset owners to [convert their assets into shares] but allow investors to trade them among themselves,” says Mo Shaikh, co-founder of Meridio.

Fractional ownership takes the logic of tokenization a step further, making it possible for unrelated parties to share ownership of a high-value tangible asset like a yacht, or real estate asset.

Vacation rental, brokerage and time-sharing firms are already taking advantage of this one. (Here’s just one of many examples.)

You may have already heard about smart contracts. These are essentially digital contracts that combine ID verification and escrow into one simple step. Smart contracts are verified by and visible on the blockchain, making them 100% transparent.

Here’s how Victor Wong, co-founder and CEO of BlockApps (a platform for creating and managing blockchain apps) explains how the blockchain can add some well-needed trust to the transaction management process. “You have a network of computers and when a transaction comes, that network looks at the transaction and verifies that it’s valid based on a set of rules embedded in the network. A simple example might be a funds transfer. Does this person have enough assets to make the transfer? If a majority of the network agrees that they do, then it goes into a database that is synced across the entire network. The network itself verifies the data,” he says.

Deedcoin is a blockchain startup that minces no words about its mission to change the future of real estate. The company describes its platform as one that, “replaces the way customers find their next real estate agent. Instead of choosing a random 6 percent commission agent, customers access the platform, input their property information, and link up with their local Deedcoin agent for 1 percent commission.”

Will Deedcoin be the biggest disruptor since Zillow? Only time will tell.

That’s all great at the high level. But what about the practical side of blockchain? Is there anything you can do with it right now to help wow your clients?

The answer to that depends on what you want. Here are some of the early blockchain tools that cutting-edge agents are already using in their businesses.

What does blockchain mean for real estate agents?

Though fears that the blockchain will make real estate agents redundant still run rampant, many experts argue that nothing, not even something as powerful as blockchain, could replace the very valuable and undeniably human role a real estate agent plays in the process.

The way they see it, blockchain won’t replace agents, it will make them more effective by helping to give them access to easy and secure transactions and data-sharing.

On a technical level, brokerages, lawyers, and bankers can all be bypassed by using cryptocurrency to buy or sell real estate via the blockchain, but could it really replace the feeling you get when you work with an agent who really gets you? We doubt it.

Ready to take your real estate business to the next level? Try Follow Up Boss for free!