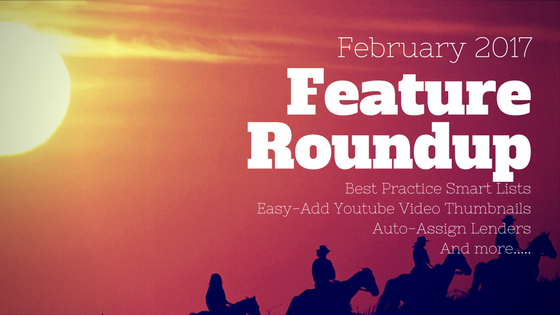 Another month, another round of new features, improvements, and fixes released by the Fubbies!

Some very exciting new stuff coming shortly, with our new Appointments feature just entering private beta after testing with our internal sales team for a couple of weeks, with work on major improvements to reporting, deal tracking and some slick additions to options for emailing contacts all underway!

Looking back, here’s what happened in February:

You can now merge duplicate contacts from the people screen.

Welcome screen when switching from FUB1 to FUB2

Happy Grasshopper is a tool for instant automated responses and long-term keep-in-touch campaigns.

We have now added a way for you to easily connect and manage your integration to Happy Grasshopper.

You can import your contacts from Follow Up Boss into MailChimp. Just click on “Integrations” from the Admin menu. Find “MailChimp” and click configure. We also display the status of your MailChimp integration from the “Integrations” screen.

You can now assign new leads to lenders automatically, this is configured on the Lead Flow screen. This update also includes an ability to stop processing leads from specific sources, more info.

We just released a feature for adding a link to youtube videos when composing an email. There is a video button in the compose email toolbar. Click the video button and enter a link to your youtube video. The video’s thumbnail will be embedded in the email with a play button overlay. Youtube is the only supported video service as of now but please let us know if you would like us to support other video hosting providers.

We just released a new feature called Best Practice Smart Lists. These lists are what we believe should be used for an optimal workflow on Follow Up Boss. Periodically, we will release smart lists to this section based on community feedback.

You can find these lists on the manage lists page. Click the button to see all the best practice lists available.

After a best practice list is added, feel free to share it with you team, and change the columns or filters to best suit your needs.

You can now sort people by custom fields

You can now mass add or remove collaborators!

We now show more clear tooltips for the relative times on the timeline now.

Incoming calls now ring both in FUB and your phone at the same time.

Previously those users using our calling feature would receive incoming calls in the FUB desktop application and if the call was not actioned, it was then forwarded to their own phone.

For agents in the field this flow took too much time and the lead would hang up; so we’ve changed incoming calls to ring both in the FUB desktop application and your provided phone number at the same time.

We also allowed users with calling to change their own number, where previously the account owner was the only one who could change those numbers.

Next task column shows next task for selected user

The Next Task column on the people view now shows the next task for the user selected.

You can now upload images directly from your computer to your Email Signature, Email Templates and when writing an email directly to a contact.

We recently improved our Trulia parser to correctly handle a new email format they have started using for rental inquiries.

Show new people at the top when sorting by last activity

Last week we released an update that changed the default sort on ‘All People’ to ‘Last Activity’. Howeverwhen adding a new person manually, there was some confusion because the new person had no activity associated with them, and would not show up at the top of the list. We released a change to make it so that manually added people always have an event associated with them so they will show up at the top of the list, even when sorting by Last Activity.

When you log into FUB for the first time, we have improved the default columns we show, as well as the default sort direction.

Display assigned for tasks on the person page

When you are viewing tasks on a person page we now display the assigned user. Previously, you had to open the task to see who was assigned.

When you are composing an email with links, the link destination URL is now displayed when you hover over the link

We have listened to customers and we no longer require a note in order to log a call.

When exporting a list of people, we now by default only export those columns which you have enabled. This results in more manageable export files which are easier to use in many third-party applications and services.

You can still get the full export with all columns by selecting the “Export all columns” option when creating an export.

Now all phone labels should default to mobile if none is specified.

Also, the order of the phone numbers has been improved, to better reflect the last phone number used.

Contacts that are in the trash stage and call you will now show their name when receiving a call from them.

Remove tags with commas and quotes

We just fixed an issue with removing tags that contained commas or double quotes, where the tag would not actually be removed.

Zillow has a new format for their Seller boost format, we now identify those correctly as Seller leads.

Certain VoicePad emails were getting identified as Move leads, this is corrected.

Certain HouseValueStore emails were not getting labeled as Seller leads, that is fixed.

When on the contact page, and you go to another contact, the phone number was getting carried over. That is no longer the case and has been fixed. We are adding tests to prevent that from happening again.