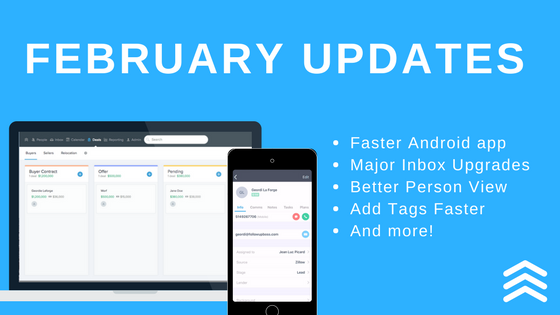 We’re doing everything we can to make sure your lead management game stays fast, consistent and 100% bulletproof so you never miss a money-making opportunity!

February’s updates were all about speed — especially for agents managing a ton of leads. No matter how many tags in the system, or where you’re following up, we’ll make sure you’re able to quickly connect with your prospects and close more deals in March.

The latest version of the Android app brings some serious under-the-hood improvements that drastically speed up load times by reducing the amount of data transmitted over the network.

Now you can follow up quickly, even between appointments.

We also made some small UX changes and bug fixes to keep your mobile experience with Follow Up Boss as awesome as possible.

We’ve released some major changes to make the Follow Up Boss inbox even more awesome.

Now you’ll get less clutter and more efficiency out of everything you do inside the inbox.

Here’s the full rundown on our February inbox updates!

Now texts and calls from unknown numbers will show up in “My Inbox” on the desktop.

They will not show up in the mobile apps (for now). As a one-time operation, any unknown texts and calls older than two weeks have been automatically archived as part of this release in order to keep your inbox clear and clutter-free.

Inbox email conversations will no longer be shown to agents who do not have access to the lead. Now it’s even easier for your team to stay focused on the lead in front of them. And of course, you can always reassign a lead or add permission where needed.

Previously, we automatically hid account level conversations and only showed those the came from your dialer number.

Now, users with our dialer package will still see any outstanding conversations they were having from the account level number, plus all the convos from the dialer number. You’ll get the full picture in a glance.

Fixes for the unread indicator

We also ran some fixes for the unread messages indicator — it should be more accurate now!

Links within text messages and call notes are now properly clickable in both the inbox and timeline.

But because we always have your back, text messages that contain links from unknown numbers will prompt a warning (as it could be malicious!) when viewed in the inbox.

In addition to an awesomely efficient inbox, we also released some changes that should make working with email drafts a total breeze.

There was an issue where pressing ‘Reply All’ when replying to an email from the inbox or timeline wouldn’t put all recipients in the email if a draft had already been saved.

We have now made it so that CC addresses disappear from the email when pressing ‘Reply All’. This solves this issue and makes sure that everyone who needs to see your email, does.

Some spooky behavior had been noticed with drafts coming back from the dead.

We weren’t actually deleting them from the database, even though they were being removed from our UI. A strange one for sure, but we’re happy to report this is now fixed!

We also made a change so that now when you’re discarding a draft on the inbox screen the compose window automatically closes. Visually, it’s now a bit more apparent that you took action so you don’t have to stop to wonder if you should move on to the next thing.

If you ever noticed the “This email is not being shared” message in your timeline, you were probably wondering how the heck to get access to this email.

With this update, we now show you which agent needs to enable email sharing or needs to be added as a collaborator to gain access to an email.

Now all you have to do is reach out to the agent and ask them to enable sharing or add them yourself as a collaborator and you’ll have complete access to all the emails in the system.

Speed Boost for Customers with over 1.5k tags

Unfortunately, some of our rockstar customers with 1.5k+ tags were experiencing slowdowns when trying to add tags to a client. (And that LAST thing we want to do is slow you down!)

We have reworked this modal and it is now way more memory-efficient and responsive.

If you’re one of our customers who noticed a lag before, please let us know how this new change is working out!

We are actively improving the speed of the person screen.

For customers with larger accounts, you should notice less lag while on this screen, and a faster timeline too.

We have another batch of changes to make this even better, so stay tuned!

Previously, when navigating through contacts, if you were typing a text message and then navigated to another contact that text message would stay. We now cache it locally to that user so that it doesn’t clutter up anyone else’s lead management flow.

We also made some fixes so that the dashboard has fresher data when changing between filters.