How to Reactivate Stale Leads 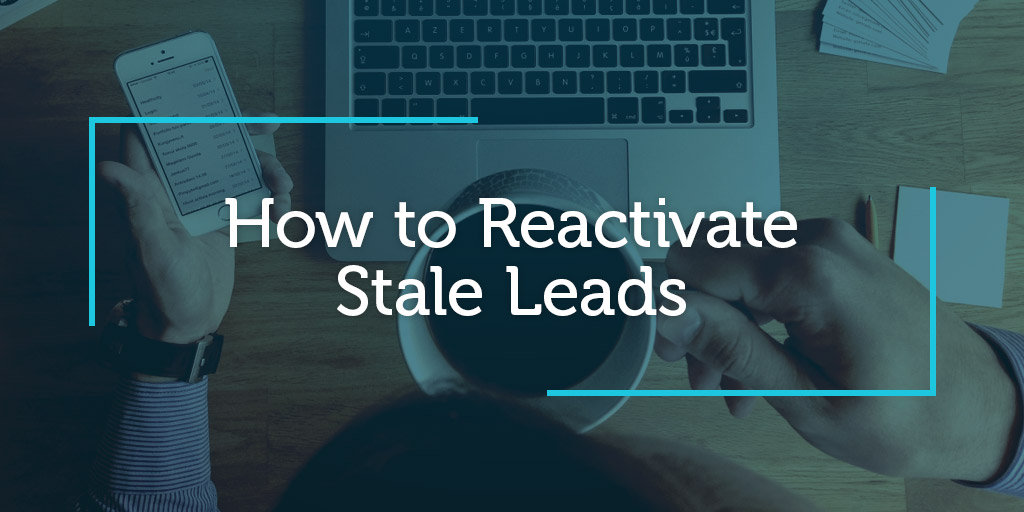 Even after your best efforts, there will be times when inbound leads don’t pay off right away. You may have streamlined your sales funnel to make sure that the right leads got through,focused on data instead of intuition to guarantee that you’re making the right decisions, and even invested heavily in testimonials to grab that competitive edge. Despite this, there are people who ended up in your CRM that just aren’t ready to get serious about working with you yet.

After trying so many tactics to turn that lead into a real opportunity for business only to see it fail, you may feel the urge to give up and move on to greener pastures. That course is fine in the short-term, but there will always be times when you need to go back and try to reactivate leads. That’s because in almost every situation, the intent of leads is to do business in the real estate market. How do we know this? Because people don’t fill out sign up forms for fun.

The question then changes from, “Is this person even interested?” to “When is this person going to be interested enough to respond to my messages?” Fortunately, that’s not as difficult to answer as it may seem.

How to Know When to Reactivate a Lead

Step #1: When Calls Have Gone Unanswered

To reactivate a lead, you first need to make sure that they’re fully deactivated. This will be painful, but it means that you turn off your automatic emails, stop sending them text messages, and generally let them go about their lives. This lets them cool off to the point where they aren’t thinking about how to actively dodge your calls and are instead continuing to live their lives.

The trick is to deactivate them for long enough that when you get in touch it feels like a change of pace, but not for so long that your competitors can come in and steal your business away. No two situations are identical, but a good rule of thumb is to not leave a lead deactivated for more than two weeks. That way people have had a good break to step back and think about what they want from a real estate team and will be as ready as ever to work with a realtor or real estate agent.

Step #2: When the Market Has Changed

The second part of knowing whether or not to reactivate a lead is largely out of your control. Because of how lead reactivation works, you need to be able to justify why you’re reaching out to people after a significant amount of silence. You can’t just email someone out of the blue after two weeks with the subject line, “Hey, I’ve decided to stop ignoring you!” They may open up that email (it’s a pretty eye-catching subject line), but they’ll be very confused when they realize that you’re only getting in touch because you were on vacation and seemingly decided that it was time to spam them again.

Instead, tie your email to market events. Examples include everything from interest rate changes, to a new home going on sale that might be interesting to them, to an analysis of the local real estate economy, and anything in-between. The key thing is that you are able to point to a market event, explain why it’s relevant to them, and justify your communication by positioning yourself to look like their helper rather than a salesperson trying to get them to sign on the dotted line.

The actual mechanics of reactivating a lead aren’t controversial and they shouldn’t come as a surprise: it all hinges on your ability to send compelling emails. Specifically, you need to be able to send a single email that will stand out in their inbox, convince them to immediately click, and then persuade them to respond. This response is the key to reactivation, as it’s a big enough commitment from them that you can feel safe investing more time into the relationship, but not so big that no one will engage you.

Because this email is so critical, it’s important to know what tactics to use and to have a few different options to try. None of these are meant to be a surefire solution for every case, but by combining your judgment with what you already know about the person, they can be effective weapons in your reactivation toolkit.

The oldest and most reliable reactivation angle is announcing big news that’s developed since you were last in touch with your lead. By pinning your communications to a team announcement or a new service, you can make it clear to your customers that you are the new and improved version of yourself, and that if there was ever a time to work together, it’s right now.

People move fast if you give them an incentive – sometimes a carrot, sometimes a stick. For the stick, the most powerful thing you can do is (gently and genuinely) indicate that you’re going to walk away because you have too much business. It’s emails like this that can get people to consider whether or not they’re about to miss a great deal and that can quickly get you a response that they’re ready to sit down and talk.

As we established in the beginning, every lead is worth investing in because no one fills out real estate forms for fun. So when you get a lead from your website, Zillow, or some other service, you know there is genuine interest in building a relationship with a real estate team. Instead of questioning whether or not they have interest, you need to question what the best way to build that