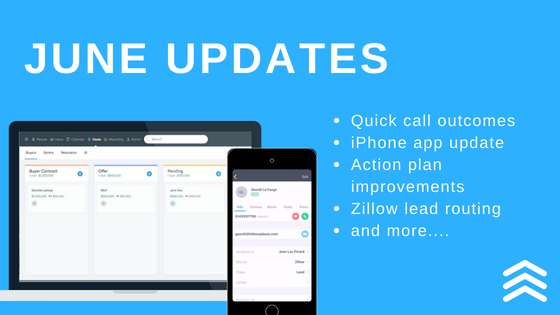 This month the team has been heavily focused on a number of backend improvements that will help improve speed and performance, as well as to set the table to make adding new features faster and easier so we can deliver on some of the amazing requests and feedback we’ve been getting through our new feedback forum!

Speaking of which, we’ve also recently completed a migration of over 900 feature requests we had cataloged in our old system to ensure that we have all your key requests tracked so we can prioritize accordingly

We’ve also already started to feel the impact of our most recent hires! Pete Grace joins us to handle DevOps (which means he’s helping to build tools to make our dev team even faster, and ensure Follow Up Boss is secure, built to handle anything you all can throw at it, and stays lightning fast even as we continue to grow).

We’re also starting to see faster updates coming for our mobile apps with the addition of a new senior mobile engineer Don Sherry. That now brings us to 3 engineers working full time on the mobile apps, and our company to 22 strong!

We’re continuing to grow the team, and have open positions in engineering and sales if you know any rockstars that would love to work with an ambitious remote team – send em our way!

Now onto everything we shipped in June!

We’ve now added the ability for your customers to send you images, files and videos in texts – never miss another screenshot of a listing or picture of a listing sign ever again!

We’ll be adding the ability to send texts, as well as support for viewing images in the mobile app in an future update.

Quick Call Outcomes for all!

A while back we did an internal release of quick call outcomes. We’re happy to announce that it is now released to everyone!

You can now quickly note that you left a voicemail or that it was a bad number. For bad number it will automatically mark it as such.

As always, we’d love any feedback (good or bad)!

We have added a new call outcome based on your feedback! You now can quickly put in ‘No Answer’.

To better improve what these mass action icons are, we improved the tooltips when you hover over each icon!

Indication if lead source directly assigns a lead to a specific agent.

Lead sources using our API integration may bypass lead flow logic and directly assign to a specific lead. When this happened it wasn’t clear and often it would seem something was wrong with the lead flow. We now provide some clearly copy on the timeline for these situations.

Action Plans with text autoresponder would fail to send a text message if the lead came in without initial phone information. This makes sense as we had no phone number to send the SMS to.

It was often the case, however, that the phone information would just be delayed and would come in a little while later. This would confusing for customers as it looks like Follow Up Boss is not working as it is supposed to as there is a phone number displayed, but the text autoresponder wasn’t sent.

Fixed a bug where some users would see “unknown agent” in the communications tab. Improved stability of tags selection. Fixed an issue on the person detail view where the tags row was stuck in a loading state after editing the background.Fixed an issue on the person detail view that caused the background row to be empty and not respond to user interaction after editing Assigned to, source, stage, tags or lender. Improved the stability of the recent people view. There was a race condition that caused a crash. It happened on slow connections when recent people are loading and there is an attempt to changed the user filter.

Person Table Performance with lots of tags follow up

As mentioned in a previous release, there would be another release for using the tags filter on the people table.

If you have a lot of tags (6k+), when you went to apply a tag, the screen would lock up for a bit, this is now resolved.

This is only a partial fix, we will have another release for the tags filter as well, as that freezes as well for a period of time.