Million-Dollar Sales Strategies that Work: 5 Practical Systems from the Best Realtors in the Business 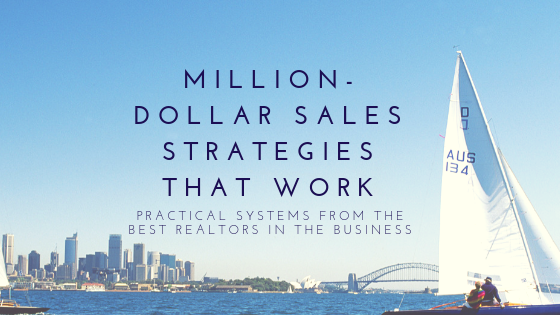 It’s a stat that’s gotten a lot of play at sales and marketing conferences around the globe, and for good reason. With disruptive new tech trends like AI and automation now firmly in the game, it’s never been more important for salespeople to take an active interest in their customers’ wellbeing.

But as with any big shift, the question is never really why or when. It’s how.

Here are 5 proven sales strategies that have resulted in multiple millions of dollars in commissions. From “old school” approaches that still work, from a decidedly human approach to sales automation, there’s something here to inspire every type of rep.

We’ve all heard the old adage, “Your network is your net worth.” But for many entrepreneurs and sales reps, friends and family are the last people you want to talk business with.

But ignoring your personal contacts is usually indicative of a bigger mindset problem. After all, if you’re not confident telling your current friends what you do, how are you going to build profitable friendships with your leads?

The other major problem is you’re leaving a TON of cash on the table.

We see it all the time in real estate. Most agents would rather cold call 100 leads than talk to someone they know about their business. But when founders of the Graham Seeby Groupdecided to go against the grain and center their sales strategy around referrals, sphere of influence (SOI) and past clients, their business skyrocketed to $90 million in just 4 years.

The team launched a four-part follow up campaign targeted at a list of just 279 contacts, some of which hadn’t heard from them in years.

The Group started running this process in 2013, the same year they founded the business.

Once they started gaining traction, then they invested in new leads. In November of 2014, the group launched their website and started getting in front of the ‘non-mets’ via Pay Per Click ads on Google and Facebook. By 2016, they had a 30-person, full service company boasting revenues of $90 million.

The light bulb moment came when co-founder Justin Seeby realized he was getting phone calls from past clients ( some of whom were ready to list homes of $800,000 in value) and he was passing them on to other agents, simply because he didn’t have time to help them.

“I started to recognize that I was ignoring all my past clients, my whole database…I’m just basically pushing them off because I don’t have time for them,” he recalls.

Strategy #2 – Use the phone wisely

In these days of texting, emailing and chatbot-ing, it can be tempting to ignore the phone.

But done right, phone follow ups (and yes, even cold calling) can play an important role in boosting your numbers.

Mitch Ribak is the former broker owner of Tropical Realty Beachside in Melbourne, Florida. He’s also known as The Grandfather of Lead Conversion. In 2014, Mitch had a whopping 1,600 closings and in 2015, he closed $127 million in transaction volume. According to Mitch, 42% of internet leads NEVER get a phone call, and the other 58% wait more than 24 hours to hear from an agent. That’s just not ok.

The way Mitch sees it, if a lead gives you their phone number, they expect a call. So he trained a team of high-octane Inside Sales Agents (ISAs) to pick up the phone and help move leads further down the pipeline.

Mitch and his team used a 4-step call-back schedule for all new leads:

When your sales have plateaued, it’s probably because you’re doing the same thing everyone else is doing, with little to no impact on your leads.

Sometimes the simplest truths can get us back on track. Once you accept that yes, your leads actually want to hear from you, you’ll see that it’s irresponsible not to call them. Or, to put it in Mitch’s words, “Call your leads! This is the cornerstone of lead conversion.”

Strategy #3 – Focus on caring, not closing

Pressed for time? Guess what. So is every other sales rep out there.

According to a study by Ken Krogue of InsideSales.com, most reps spend 64.8% of their timeon non-revenue generating activities. But neglecting your clients after the deal is signed is a massive mistake.

The good news is, when everyone’s running left, it gives you a crucial opportunity to swerve right and be the one who stands out. That’s exactly what CRG, a real estate company from Myrtle Beach did when they created a ‘Client Care Team’ with the sole purpose of delighting clients, after the deal is inked.

The result? The CRG team tripled their conversions and closed over $25 million in sales volume.

“After looking at stats, we were great on the front end at generating leads and staying in front of people, but we kinda sucked after the close,” says CEO, Preston Guyton. Now everything they do is about client service.

According to Preston, hiring a ‘Client Care Coordinator’ instead of a “traditional” sales manager was one of the best decisions for his business.

As more and more reps become overly-reliant on tech, field marketing and live events will be a big part of what separates the best from the rest.

Counterintuitive as it may sound, in this digital age, all your prospects really want is a stellar in-person experience. And in real estate, that includes open houses. Mega agent Monica Diaz and digital marketing expert Jay Campbell have closed more than $300 million in sales by supercharging their offline sales strategies.

To be fair, social media is still a big part of their method. They run well-targeted Facebook ads to promote listings and open houses. But the real magic happens after the open house, when they turn each visitor into a long-term source of consistent leads.

Open houses don’t have to suck. While most agents complain about having to work weekends, Jay and Monica view open houses as intermittent events that bring in hundreds of leads over time. According to this dream team, the right attitude is everything.

“It’s not about it being an inconvenience. This is just part of the process, something you’re doing for your business and for your client as well,” says Monica.

There comes a time in every salesperson’s career when you’re so overwhelmed, you literally want to give up.

It may sound like a champagne trouble, but the stress of burnout is very real. And if you’re doing it right, you will inevitably end up with more work than you can handle. That’s when you need to work smarter than ever.

That kind of make-or-break pressure is exactly what led rainmaker Barry Jenkins to scale his business to the #1 Better Homes and Gardens team. In an effort to be there for his family andhis customers, Barry structured the core of his business around the principle of leverage.

He automated his entire business — from lead gen to follow up, to team member onboarding and transaction management — using a killer combination of smart systems. With this approach, Barry nearly doubled his transactions to 240 deals in 2017, while working just 25 hours per week.

Here’s how he did it:

When Barry had to leave the movie theatre with his son to take a call from a lead, he realized he couldn’t continue to be the bottleneck in his own business. It just wasn’t worth it.

By combining the principles of leverage and the Golden Rule, Barry automated his business while providing a better, more relevant experience for leads and team members. “Automating lead generation and follow up gave my agents the flexibility to have some kind of rhythm in their life,” he explains.

No matter what product or service you’re selling, the most important tool you can ever own is your ability to think strategically about how to give your leads what they want.

While it’s great to look for inspiration in proven strategies, the best approach is always the one that fits the unique ethos of your business.