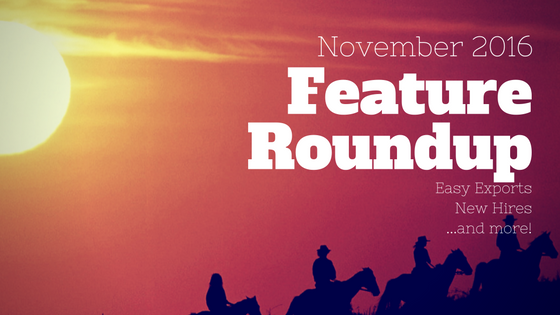 Another month, another set of updates to everyone’s friendly neighborhood CRM!

With a couple of major releases last month, November was about tweaking and improving some existing features and training our new team member!

This month we’re really excited to have officially hired Joe Ingersoll to the engineering team! Joe brings with him a huge wealth of senior technical leadership experience as well as industry knowledge having been the original founder and CEO of Tigerlead.

Additional team members will be coming on board in December as well but we’re always looking for more top talent (technical and non-technical) to join the team so if you know anyone who would be a good fit, they can click here to check out our openings.

Account owners can now export contacts. Since Smart Lists are now easier than ever to build, assembling the exact list of contacts you need to export (for postcard campaigns for example) is a piece of cake!

For more information see this article.

Originally a person’s background information was always on a single line. We have made this a multi-line display so you can more easily read the users information.

Semi-colon allowed for separating emails in To, CC and BCC

Now, if you are sending an email to multiple people, you should no longer be tripped up by having a semi-colon separator in the To, CC or BCC address lines.

Improvements for the import tool have been released.

These include: Much better overall matching Automatically hiding/skipping columns that have no data Better handling of date columns Handling columns with multiple emails separated by commas or semicolon In-app FAQ More behind the scenes improvement to speed up the imports

Fix for switching between smart lists

There was a rare error, when switching between smart lists quickly, it would show the wrong smart list data. That is now resolved.