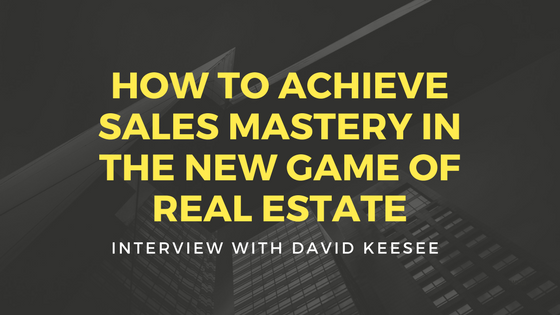 As the third generation in a family of real estate agents, he’s seen firsthand how the role of Realtor is really a sales and business position. Today, hundreds of agents and entrepreneurs turn to David to learn those skills.

The Head Coach and Founder of The League gave us his inside insights for helping Realtors build the skill of influence and why professional agents have a duty to sell well in today’s noisy real estate landscape.

It’s impossible to narrow it down to one thing. I think there are actually three major factors at play. Number one is the agent’s psychology around following up with leads. People think leads have value, but they don’t. You have to give them value by nurturing a relationship with them.

Number two is not having the actual sales skills. The skill of influence, whether that’s through phone, text, whatever. And number three, lack of strategy. How do you provide value for 3 to 6 months without losing your leads? That’s why I love Follow Up Boss, because strategy is exactly what it gives you.

How has automation changed the game?

If your lead follow up is based on your memory, you’re going to lose.

Before automation, agents used to call people on the phone, break out a 3×5 card and jot a few things down. Now leads come from everywhere and you’re not the only one that has that lead. The agents who win will be the ones who follow up the best, the most consistently, and for longer than anyone else.

I’m always amazed by how many agents are spending their days going in and out of multiple CRMs and the stress that puts on their brains. It’s a system that lends itself to losing leads. Your follow up strategy can’t rely on your memory in any way, it has to be automated and predictable.

Not only are there so many CRMs. There are so many different ways to communicate with leads—for example, text, phone, and email. How can agents know which ones to use?

Why are so many agents reluctant to follow up with their past clients and SOI?

It comes down to their opinion of sales. But here’s the thing, people don’t dislike salespeople, they dislike bad salespeople.

And that’s a problem because if you’re good and you don’t have a solid strategy for following up with your leads, your prospect will end up with a bad salesperson. There are a lot of amateur agents out there who just didn’t do their clients right. They took the listing, sold the house and never talked to the client again.

If you’re one of the agents who really does care, you owe it to your client to follow up and get them past that resistance. There’s a new breed of professional agents out there who know their value and aren’t afraid to stand up for their clients. But how can that be you if you don’t have a strategy that supports that?

A lot of agents fall into what I call the talent trap tragedy. When the game got to a new level, they relied on talent, not skill. But the amateurs have talent, the pros have skill. Skill always trumps talent. That’s what Sales Impact Academy is all about. How do you develop the skill of selling and marketing in today’s economy and convert more leads?

What advice do you have for agents who are worried about sales scripting or not knowing what to say?

For most agents, what they think is their problem is not what their problem actually is. Most agents biggest problems are not real estate. They are lead generation and lead conversion related. One question I hear all the time is “What’s the best CRM?” What is the best script?

But the truth is, inaction is a symptom of not being organized. If you’re not getting it done, it’s probably because you’re spending too much time obsessing over this CRM or that CRM. And that’s the only thing worse than not having one at all! If you wake up in the morning and you’re thinking about fixing this and that, you’re not going to get anything done. Complexity is the enemy of execution.

At the end of the day, inaction comes down to two things. One, you haven’t developed your skills to the point that you know you’re going to win. Two, even if you got the lead, you wouldn’t know what to do with it because you don’t have your nurturing system in place—and not something that’s just chanting scripts. Scripts are good in the beginning but learning how to sell trumps scripts.