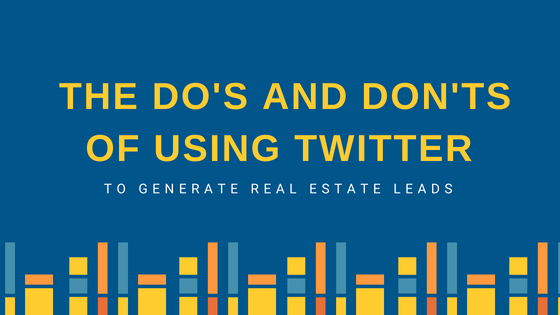 If you’re using social media as part of your real estate lead generation strategy, you’re probably already active on a bunch of different channels. After all, millennial homebuyers love Instagram, Pinterest is awesome for showing off properties, and Facebook is for everyone.

Love it, or you hate it, you’d do well not to ignore it. Twitter ranks as one of the leading social networks worldwide with 328 million monthly active users. On average, approximately 6,000 tweets are tweeted out on Twitter every second.

But there’s definitely a right and wrong way to use Twitter for lead gen. If you’re ready to give Twitter a try, lean in. We’re about to tell you everything you need to know to make it worth your while.

We’ve all heard of Twitter, but with all those @’s and #’s (not to mention the ranty politics and cold-blooded trolling), it can sometimes feel like the least accessible of all the social networks.

But it’s not as daunting as seems. Here’s a quick recap on exactly what Twitter is and who you can meet there.

In a nutshell, Twitter is a social networking and microblogging service where users can read and post short messages, a.k.a. tweets. Tweets are limited to 140 characters, but users can also upload photos or short videos.

As with the other major social networks, Tweets can be posted publicly or sent as direct messages to other users. And its users are pretty dedicated. In fact, 81% of millennials check their Twitter accounts on a daily basis.

Millennials make up the vast majority of future homebuyers and sellers, which is a BIG part of the value prop for Realtors on Twitter.

Despite the fact that Twitter isn’t as widely associated with marketing as other social platforms, roughly 80% of Twitter users have tweeted about a brand. That gives you a huge advantage over other social networks where leads commonly feel “sold” to.

And there are plenty of organic leads to be had. It’s all about how you connect with your audience and your ability to share the kind of high-value, in-depth expertise that wins on Twitter.

When you take the time to become a master tweeter, you’ll not only achieve greater visibility as a local authority in your market, you’ll also get a serious leg up over competitors who underutilize the platform.

Here’s a sum-up of the awesome benefits of using Twitter:

Now let’s take a closer look at how to maximize your lead gen activity and avoid the common pitfalls on Twitter.

As with all social media networks, the features, nuances and unspoken rules for how you engage on Twitter have evolved over the years.

Here are some of the latest best practices used by Twitter pros to help generate leads and sales (without every being sleazy about it).

The temptation with Twitter is to dive right in and start firing off the tweets. But just as you would with your other social networks, you need to take the time to develop a set social media calendar and strategy to clarify the kind of content you’ll be tweeting (e.g., personal updates or professional only?). Make sure your Twitter calendar is packed with value-driven content that only you can offer including, facts about the neighbourhoods you work in, specific areas of local expertise, and seasonal updates relevant to your market.

Once you know what to say, tools like Buffer can automate your tweets and take care of the ‘when’ part of the equation.

While you can definitely lighten the Twitter workload by using an automated content calendar, the magic of this platform is in its real-time nature. That means you’re going to have to get in there and join the convo. But keep in mind, not all convos are created equal.

Setting up a Twitter List helps you follow thousands of relevant leads and influencers so that you can filter through the noise and see exactly what your most important Twitter connections are up to.

Once you know what to tweet about and who to talk to on Twitter, it’s time to get in there and engage! From liking, commenting and re-tweeting, to hosting regular group chats, there are a ton of different way to get in the game. However you choose to engage with your leads on Twitter, just remember to keep it relevant and value-driven.

Providing your leads with awesome insights and unique value will help you generate valuable feedback on your content, gain new followers, create a sense of community and help foster stronger relationships with your leads.

A classic rule for great Twitter etiquette is to always follow back and/or re-tweet when someone follows or mentions you.

Visual content is king — especially on social media. Tweets with photos, images, and videos get more views. Like, way more.

According to Buffer, Tweets with images bring in up to 18% more clicks, 89% more favorites, and 150% more retweets. Bonus points if you can make it entertaining, educational or emotional.

Another big rule of engagement on Twitter is to ask your audience questions.

People love talking about local events and issues — and they love polls. Add a few polls or questions to your Twitter content calendar and you can count on a boost in engagement, quality followers and leads.

Give it a personal spin

It’s been said before, but in the Age of the Internet, it ALWAYS bears repeating: Real estate is a people business.

No matter how many hot social networks hit the internet, people are always going to prefer to interact with a human. (In fact, as the number of social networks increase, your leads will probably value a personal touch even more!)

Show your human side by posting your behind the scenes updates, events and celebrations. Use an easy, familiar style and don’t be afraid to relax and be yourself. After all, the goal is for them to one day meet you in person!

You’ve probably heard this one before, but it’s another rule that’s worth repeating.

Make sure 80% of what you post is helpful or interesting information — things like how-to articles, business recommendations, local news, home buying tips, etc. Once you’re sure you’ve provided value to your leads and followers, then you can go for the 20% of promotional posts such as, listings, open houses and special offers.

Now that you know what works on Twitter, here are a few simple rules to prevent you from accidentally alienating your leads.

In the words of Grant Boelter of REALTOR Magazine, “Twitter isn’t just a platform for sharing information, it’s a chance to make your elevator pitch in 140 characters. Ask yourself before tweeting, why would somebody be interested in this?”

As with any marketing and sales activity, don’t just focus on features. Make sure every post — whether it’s home buying tips or a promotional listing tweet — has a clear answer to the “What’s in it for me?” question.

The Best Real Estate Logos for Solos and Teams: 16 Ideas to Inspire Your Own

How to Deliver a Killer Listing Presentation