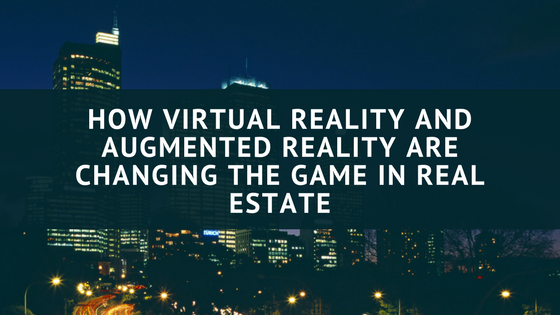 By 2021, the market for virtual reality (VR) and augmented reality (AR) technologies is expected to reach $108 billion.

That is a BIG number.

And according to Goldman Sachs, VR alone will be an $80 billion dollar market by 2025 — with $2.6 billion of that coming directly from real estate.

If you’re wondering what the hype is all about, read on. We’re about to tell you exactly how VR and AR are changing real estate for good.

What is Virtual Reality and Augmented Reality? (And what’s the difference?)

You already know VR and AR are making major headlines in real estate.

But before we dive into how and why these tools can be used to take your job as a Realtor to a whole new level, let’s get clear on what exactly virtual reality and augmented reality actually is, and where to draw the line between the two.

What is Virtual Reality?

Here’s the definition of virtual reality, according to the Virtual Reality Society:

Virtual reality is the term used to describe a three-dimensional, computer generated environment which can be explored and interacted with by a person. That person becomes part of this virtual world or is immersed within this environment and whilst there, is able to manipulate objects or perform a series of actions.

Even by simply reading the definition, it’s clear to see how helping a person become “immersed” within an environment without actually having to travel there physically could be a beautiful thing for real estate agents.

And we’ll show you exactly how leading edge agents are taking advantage of VR in a minute. But first, what’s the deal with augmented reality? Or AR?

What is Augmented Reality?

The best way to understand augmented reality is to think of it as any additional tech, tool or app that adds an extra layer of interactivity within a virtual reality environment. (Think Snapchat lenses and Facebook filters.)

AR can work in several different ways and is used for many different reasons, but in most cases, AR involves a scenario where virtual objects are overlaid and tracked atop real, physical objects to create the illusion that they’re in the same space.

AR devices have a display, input device, sensor, and processor. This can be accomplished through smartphones, monitors, head-mounted displays, eyeglasses, contact lenses, gaming consoles, and more. Sound and touch feedback can be included in an AR system as well.

AR is already being used to help agents bring flat print material like floor plans and photos to life by simply running them through an AR app on their tablets or mobiles. Now, we’re even starting to see instances where personal items can be integrated, for example to show a potential buyer exactly how their furniture will look in their new home.

What’s the Difference between AR and VR?

Virtual reality and augmented reality are similar in some important ways.

The main difference between VR and AR isn’t really “what” they are, but rather how they’re used. VR usually requires the user to wear some kind of headset in order to visualize a real life setting in 3D — while AR adds virtual elements to real world through apps on phones, tablets and laptops.

When you combine the two, it’s called mixed reality (MR). Using AR and VR together (a.k.a. MR) can help real estate prospects get an astonishingly detailed, immersive experience of your real estate properties.

How VR and AR Will Transform Real Estate

Now Jeff’s obviously a believer in this stuff, but if you think about it, it just makes sense.

The right photos can work wonders for your listing and to quote another leading VR solution provider, Peter Alden, VP of Sales for Floored says, “Why look at a picture, when you can walk through a world?”

They have a point.

In fact, investors predict even more innovative disruption in the real estate VR and AR space.

According to Matthew Hood of the Matthew Hood Real Estate Group at Sotheby’s International Realty, “A number of young tech companies are exploring an entirely in-VR experience where you enter search criteria like price, location, and number of rooms and you’re presented a number of homes and you can virtually tour….Once that happens, you’ll look back and say, ‘How did we do this before?’”

VR/AR for Property Tours: Here’s how it works

Here’s how it works using photos:

Another way to create awesome VR property touring is to do what Matterport does and use a special camera to capture a complete 3D rendition of the property.

Here’s how it works using a 3D camera:

Rental marketing platform, Rentberry uses VR and AR to take their listings to a whole new level via the latter option while sites like Zillow and Realtor.com use the former.

“Thanks to new technologies, all you have to do is put a VR headset on and get yourself immersed into another reality. All the perks of an open house without the need to attend one….Real estate companies see huge potential in the use of both VR and AR. While Virtual Reality can serve as an alternative to open house, Augmented Reality might help potential customers visualize their for-now-empty-homes with furniture and decor”, says Oksana Tunikova, Content Manager at Rentberry.

Examples of VR and AR in Real Estate

Rentberry isn’t the only one taking advantage of VR and AR tech for real estate.

Here are just three more of the many companies using virtual and augmented reality to woo their real estate prospects:

Virtual viewing can help both real estate agents and home buyers feel so much more confident about buying (or in Rentberry’s case, renting) sights unseen.

And that’s important because according to Redfin, 1 in 3 home buyers make their offers without ever seeing the property in real life. That’s up from barely 1 in 5 just one year ago.

Who Are the Market Leaders in Real Estate VR and AR?

If you’re considering investing in AR and VR for your real estate business, there’s no shortage of innovative vendors to partner with. Here’s a rundown of some of the market leaders in virtual staging for real estate.

Matterport – Immersive media tech for 3D and VR-enabled virtual tours which can even be offered in real-time.

Immoviewer – Describes itself as a “3D virtual reality tours for real estate pros”. This is a great option for solo agents or small teams.

roOomy – 3D modeling platform to showcase listings. The differentiator on these one seems to be their awesome use of AR and superior interior design capabilities.

Virtual Xperience  – creates VR visualization packages for unbuilt or yet to be available spaces.

OmniVirt – VR Ad Platform with an industry-leading VR Player that allows you to embed your virtual tour content on your website to be viewed across any browser and any device.

Keep in mind, things are evolving quickly in VR/AR world.

In fact, in December 2017,  Rooomy and Matterport announced they’ll be working together to offer fully-furnished virtual property tours.

Expect to see more, better and less expensive solutions regularly hitting the market as vendors and agents get a better idea of how buyers use VR and AR, and what they want to see in the future.

These days, 95% of buyers use the internet to look for homes, and 51% buy homes that they have found using the internet.

On top of that, NAR’s 2017 study found that only buyers over the age of 71 are contacting a Realtor before looking online. Compare that to the 71% of millennials who are excited about VR and the math just makes sense.

VR and AR technologies are literally the future, even in a people business like real estate.

And that’s really a wonderful thing. VR and AR tech can help agents make a stellar first impression with both home buyers and sellers, solve common communication challenges with prospects, and even help agents spend their time more wisely by not taking buyers to view properties you know they won’t like.

All of which will result in closing more deals in less time.

The Best Real Estate Logos for Solos and Teams: 16 Ideas to Inspire Your Own