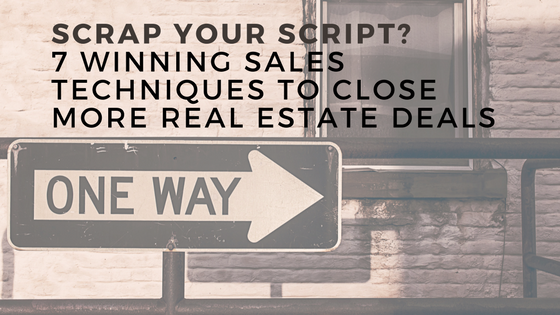 If you’ve ever been on the receiving end of a scripted sales call, you know just how icky they can feel.

Lines like, “What would you say if I could get you the money you need?”, or the world’s worst closer ever, “So what do you think?” still haunt many a potential home buyer. No matter how well-orchestrated, you’re not going to close real estate deals with see-through phrases like that.

And the thing is, you know it shouldn’t be that way.

Scripts are there for a purpose but as ironic as it may sound, your sales calls can get seriously derailed when you refuse to go off-script. We asked 7 real estate sales masters for their no-holds-barred opinions on how to use sales scripts.

Here’s what they had to say.

Scripts Are a Great Starting Place

David Keesee is the CEO of Keesee Company and the creator of Sales Impact Academy, the go-to annual live event for agents who want to master the art of influence.

“I think that if an agent has not learned the art of selling yet, scripts are a great place to start.  But at the end of the day, scripts will only take you so far,” says David.

According to this sales master, “Scripts are a great starting place, but nothing trumps learning how to sell.” The average agent that goes through David’s sales training has grown their business by 4X using his strategies — and they all boil down to your ability to make a difference in someone else’s life.

“In the beginning of my sales journey, my inspiration was all about how to make more sales and make more money.  The more I master the art of influence the more it has become about how I can make a difference,” says David. While it’s never a bad thing to use material wealth or possessions as part of what fuels your calls with prospects, lasting success comes when you can connect that vision to the value you’re delivering to the person on the other end of the phone.

Better Way to Win: “I think the biggest thing is for agents to learn to switch from selling to serving. Ask yourself: How can I serve?”

Separate Yourself From the Herd

When scripts become overused, everyone suffers.

Chris Smith is the co-founder of Curaytor and author of the bestselling book The Conversion Code, which teaches agents advanced sales techniques. “My favorite line in sales is ‘So what do you think?’ as a way to close. It hasn’t helped me close any business, but I’m really hoping one day it will,” says Chris.

Don’t worry. He’s definitely being tongue-in-cheek. But honestly, how many agents do you know who walk through the script as if they’ve never had a single original thought?

There seems to be a sort of hype cycle with real estate sales scripts where a flashy sales guru or agent shares their “winning script that sold X amount of business” and everyone picks it up and follows it word for word. Ugh, painful.

Among Chris’s other satirical nuggets of wisdom for agents using sales scripts, he suggests that, “If you do use a script the most important thing to remember is to read it like a mundane robot. Reading it word for word is actually ideal.”

And when we asked him whether agents should use a script or wing it? “They should definitely wing it. Not knowing what to say or why or when or how is the right way to go.”

Better Way to Win: Know what you’re doing but please don’t use your script as a crutch!

Dale Archedkin is the director of marketing and lead gen for the Global Living Companies at Keller Williams Realty in Philadelphia and he’s also the founder of Smart Inside Sales, an ISA training and coaching company.

“Agents should absolutely begin with scripts in order to develop the habits of asking the right questions. Once they get to the point where the right questions are baked into their DNA, they no longer need them and they can be fully engaged in each and every conversation they have,” says Dale.

Does this mean you’ll need to ditch the lengthy intros and two-minute explainer lines? Probably.

According to Dale, “the best scripts are mostly composed of questions, with very little telling on the agents part. Agents should understand WHY they are asking questions and which questions are the best to ask.”

But how do you ask great questions?

“The key principle is to understand the lead’s situation, what they want and don’t want, what they will and won’t do, and what it will gain or avoid for them, to the same level that they understand it. That drives the agent’s line of questioning,” Dale says.

So to recap, you need to get a handle on:

And you need to make sure they stay with you the entire time. Leave the jargon at the door.

So where do most agents go wrong? Here’s Dale’s opinion:

“Where agents struggle is forgetting that their conversation, created by their questions should be entirely from the perspective of discovering who the lead is and how they think.  When agents forget that, and approach the lead from the perspective of what the AGENT wants, that’s when they become shallow salespeople that strike out more often than they succeed.”

Dales finds his inspiration for sales mastery in the successes of my coaching clients and in that of the coaches in my company. “I LOVE working to improve the communication between people, and that’s what sales is all about.”

Better Way to Win: Focus on connecting with the prospect and it will be way easier to walk through the call in their shoes.

Barry Jenkins is a Virginia Beach Realtor and the leader of the #2 Better Homes and Gardens Real Estate Team in the US.

According to Barry the way an agent uses scripts will have everything to do with how they learn. “If you need to memorize the script, do it. The problem is when the person on the other end of the line doesn’t fit into their box. Learn the method that works for you but make sure you’re not putting on a show. Don’t try to impress. More than anything else, authenticity in today’s world is what sells.”

Barry and his team use the Socratic method of selling (also used by big names such as Socrates and Jesus) to teach through asking well-crafted questions. “Many times we ask the prospect a question and we have no idea that the prospect is actually the kid in the classroom who when the teacher says ‘Do you have any questions?’ doesn’t even know what to ask because they’re so lost.”

So what do Barry and his team of rockstar agents do instead?

Too many scripts and sales phrases put the burden of information on the prospect. Instead, engage them in their buyer journey. Barry’s favorite sales line is, “Out of the homes you’ve seen online what did you like and what would you change?”

This is a much more nuanced way of asking, “What kind of house do you want?” The prospect may not know exactly what they want, but they have an opinion. Asking a well-crafted question gives you better insight on their search criteria and opens you up to more opportunities to connect with them on a deeper level.

If they bring up dogs, connect with them on whether or not you’re a dog person. The next question Barry and his team ask is, “If you could wave a magic wand when would you be in your new house?”. This question is a great way to mitigate money-based objections and get a clearer picture of when a client’s lease is up or when they’d really like to move.

Right now 20% of Barry’s online leads are considered hot, meaning his agents expect them to close in the next 90 days, simply because they took the time to connect.

Better Way to Win: Focus on answering real questions for your prospects.

Find What Works for You

Mitch Ribak is the founder of Inside Sales Agents and a true master of lead conversion. He’s also a self-proclaimed “bullet point guy”.

“I find that unless a salesperson (regardless of industry) can internalize the script, it comes off canned. For me I’ve always been able to open a conversation and inject humor to start a great relationship. With that said, our ISA’s at Inside Sales Agents have to learn their scripts and internalize them.  They do a great job of following scripts,” explains Mitch.
Mitch recommends building the script around the way that person would naturally talk. “Years ago, in a past life, I opened call centers for companies. The first thing I would do is tear up the scripts they were using and then I tailored each script around their personality and strengths while hitting all the major points I wanted to hit during the call.”

Mitch has made a career out of optimizing lead conversion strategies. “Most of my inspiration comes from the challenge of figuring out what works and what doesn’t work. I’ve been a problem solver all my life and sales is one of those things that you can always tweak to make it better. I believe that’s why we have done so well with Internet Lead Conversion over the years as it’s always a work in progress to increase sales,” he says.

“My favorite sales line that I’ve used for many companies I’ve owned is ‘I don’t sell you, I help you.’ It’s pretty simple and very effective. I always go on to tell them that my only goal is to accomplish their goals. It goes a long way when people actually think you are working for them than yourself. It must have worked since I closed 36 homes my first year, 50 my second year and 80 my 3rd and 4th years before I opened my brokerage.”

It just makes sense. If you’re not ready to help your prospect, get out of the way so someone else can.

Better Way to Win: Customize your script to fit your natural voice. NOT the other way around.

Solve a Problem for Your Prospect

Larry Kendall is the author of the 2018 Axiom Business Book Award Winner, Ninja Selling. He also has over 40 years experience in the real estate industry.

“Scripts keep you on-purpose. If you are winging it you are on-accident,” says Larry.

A script that helps you become a better listener? Sounds like one worth following.

According to Larry, “The best scripts are questions that determine the client’s pain or pleasure. You then propose a solution. Your job is solving – not selling. If you are going to make a statement, our favorite is ‘Tell me more about that.'”

And how does a guy like Larry find his inspiration for sales mastery?

“For clients our goal is to solve not sell and never put them in the position where they feel pressure. For the salespeople we train, our goal is to help them increase their income per hour so they can have a life. Our inspiration comes in changing lives.”

Better Way to Win: Go back to basics. Remember that every time you sell a home, you are changing someone’s life.

Sales doesn’t have to be sleazy. With the right script and approach, it can even be fun.

Follow Up Boss helps you keep your prospect calls relevant. You can set up relevant drip sequences, attach notes and docs to lead profiles and keep all your lead intel in one simple, distraction-free CRM.