Want to Double Your Transactions on a 25-Hour Work Week? Here’s How. 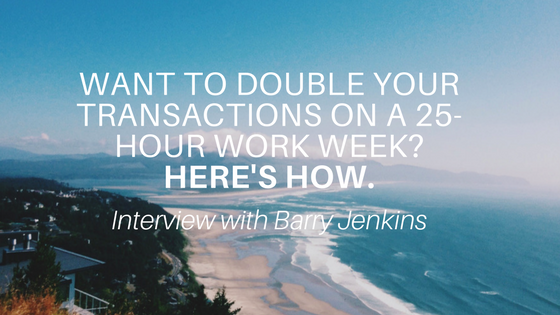 Barry Jenkins’s Friend in Realty real estate group was recently named the #2 team in the US with Better Homes and Gardens Real Estate.

We sat down with Barry to learn how he leveraged automation to almost double his transaction volume from 2016 to 2017 while working just 5 hours per day.

He had single-handedly closed 120 homes and by all external appearances, he was killing it. But behind the scenes, he was totally burnt out.

“I still remember being at the movie theater with my son and having to leave in the middle of the movie to take a call. In those days, I was paying $500 for 4 leads on Realtor.com. I had no choice but to take the call. I was exhausted. I told my wife, ‘This is not what I signed up for.'”

Barry knew he needed a team. But he didn’t want the revolving door of real estate agents you see so often in the industry. “I had to come up with a way to add so much value to my agents that they wouldn’t leave, and at the same time, figure out a way to spend more time with my family.”

Barry structured the core of his business around automating real estate lead generation and follow up. He started using Follow Up Boss and Zapier to send automated voicemails and videos to leads and customized them according to lead source to make sure they were relevant.

Rather than being glued to their phones like he once was, Barry’s agents can close more deals in less time. “Automating lead generation and follow up gave my agents the flexibility to have some kind of rhythm in their life.”

For many real estate agents, especially new ones, writing the contracts and preparing the paperwork is a huge point of friction. You have to be good with people, technology andnumbers — it’s a lot to manage.

Barry uses automation to take what he calls the “science side” of the business off of his agents’ shoulders so they can focus on what they do best. “Everything about my business and the reason it’s so successful, is leverage,” says Barry.

Barry and his team built their own “intranet” around that core philosophy. Today, they use 150 Zaps to automate the bottlenecks out of the business, protect their focus and scale to massive growth (while still making it home on time for dinner).

“We built our own intranet and added Google forms and Jotforms forms so that when my agents write a contract, instead of going to the MLS and printing off documents, they just hit ‘Submit’ and it’s all done for them. When it comes time to manage the lender, attorney and everyone else on a contract, all they have to do is fill out all the data, which goes to Zapier and then automatically goes out to all the parties involved in the transaction. We have completely automated transaction management.”

It’s not hard to see why an agent would love working for a team that consistently closes more deals in less time, and with fewer admin headaches. In fact, research has shown that sales professionals waste up to 64% of their workday on administrative tasks. For agents who want to make it to multi six-figure status without sacrificing their personal lives, the value of working on a team like Barry’s is clear.

But what’s in it for Barry’s leads and prospects?

“Two years ago, initial lead follow up was a big topic,” explains Barry. “But now there are so many solutions that do that, contacting the lead within the first five minutes isn’t enough to make you stand out. What’s going to help you stand out is staying relevant over a six-month period of time. I believe long-term follow up is what will make agents successful in the future.”

According to Barry, follow up has to be long term and relevant.

“With Zapier and Follow Up Boss, what we’re able to do is create different tags that help us deliver super relevant content at exactly the right time in the buyer’s journey. For example, all my agents have to do is tag a lead ‘Altos’ and it automatically fires to Zapier, which automatically fires to Altos Market reports and the lead receives a robust, relevant weekly market report.”

“I call Zapier my digital duct tape. It connects everything,” Barry jokes.

But in all seriousness, Barry says the ability to leverage content through Zapier and Follow Up Boss is the key to delivering relevant, long-term follow up to help convert a large volume of internet leads.

“I’m not aware of any CRM other than Follow Up Boss that gives you the ability to manually automate. If I want to have a succinct follow up plan for 4 months and use video, voicemail and text messages, I just tag the lead ‘Drip’ and Follow Up Boss then goes to Zapier which then goes to Agent Legend which automatically sends relevant voicemails, emails and videos directly to the lead.”

According to Barry, smart automation is what gives his team the ability to scale and leverage. “We have the automation, but what really matters is that we’re able to wait and apply it relevantly,” says Barry.

“Everybody just wants to put their leads on autopilot. The problem with that is that robots and machines are never going to be as relevant as humans are,” explains Barry.

Rather than blasting leads with generic content, Barry and his team focus on creating a relevant message and automating that message to be delivered in a way that feels personalized and never spammy.

For example, while many real estate agents tend to focus on the hot leads and let the long-term leads fall through the cracks, Barry and his team focus on delivering a relevant, contribution-focused drip campaign that touches long-term buyer leads at important points throughout their journey. “We always come from a place of contribution, that’s why our drip content is so popular. It’s not like those long campaigns where you can tell it’s pre-written content.”

According to Barry, drip content is not unusual, but relevant drip content is. “We decided we were just going to be relevant,” he says. And with automation in the mix, every single lead that crosses Barry’s path will receive relevant content from him and his team, even if they don’t provide their email address.

“When someone checks their home value on my website, they have the option to register with their phone number and email. But many people don’t want to do that. They just want to give me their address. In these cases, the lead goes from the website to Follow Up Boss and then we’re able to send that lead to Zapier which then sends the lead’s address to Thankster, where we’ve got a template for a handwritten card set up. All we have is their address and we know they want to check the value of their home.”

Imagine being able to capture every lead that visited your website.

“We don’t even know their name. Yet, we’re able to send them a card that gives them a relevant message. It’s something along the lines of, ‘Automated home values are helpful, but if you really want to know what your home is worth, reach out to us and we’ll do an assessment. No strings attached.'”

In 2017, Barry set a goal of leveraging content. He created all kinds of relevant content for all types of leads, depending on where they are in the home-buying journey.

And he did it with one goal in mind: To empower the home buyer.

It’s an approach that is definitely yielding results for Barry and his team. The Your Friend in Realty group’s transaction volume skyrocketed from 140 deals in 2016 to 240 deals in 2017.

Barry took himself out of production while closing 100 more deals and almost twice the transaction volume, in just one year.

It’s safe to say Barry and his team are leveraging automation better than most real estate teams. But with so many workflows within the team, how exactly does that break down?

Here are some of Barry’s favorite Zaps.

Barry and his team have a Zap set up so that when a client ratifies a contract in the Deals section in Follow Up Boss the client gets sent a BombBomb video with a GIF of Barry waving saying “Congrats!”. (It’s WAY more fun than a static image!)

Ask for a Review

After an agent closes a deal, they tag the client ‘Review’ which sets a Zap in motion to automatically send the client a voicemail, text message and email from Barry thanking them for their business and asking for a review.

And because Follow Up Boss lets agents tag using their best discretion, Barry’s agents are able to tag the clients who will give them the best reviews.

New agents coming into Barry’s team get immediately added to Follow Up Boss. Barry’s admin then tags the agent which triggers an agent onboarding Zap where the new agent receives training videos directly from Barry.

zBuyer sends their leads in such a way that it’s impossible for most CRMs to pull them in automatically. Barry and his team use a Google spreadsheet to get leads into Zapier (the only manual part of the whole process) which then go straight to Follow Up Boss, then Zapped to Agent Legend for zBuyer follow up.

To quickly qualify leads, Barry has a Zap set up based on a trigger email from Agentologysaying they qualified a lead. The lead then goes straight to email parser, which then uses Zapier to tag the lead as qualified in Follow Up Boss and help Barry’s agents quickly find all qualified leads.

When Barry’s agents tag a lead ‘NudgeText’ in Follow Up Boss it triggers a Zap to a “nudge drip” using Agent Legend to send weeks of highly customized texts to leads.

Looking for more Zaps to help you capture and nurture leads automatically? Get started with the sample Zaps below or click here to see additional ways Zapier can help integrate other apps with Follow Up Boss to help you convert more leads in less time!

People tend to use a lot of fancy words when talking about technology, but at the end of the day, our reasons are always personal.

“I have a son with special needs and I need to pick him up from school at 2pm every day. So I go into the office at 9 o’clock and I leave at 2pm, Monday through Friday. In addition to running my team, I’m also the Realtor in Residence for Ylopo and I’m a Club Wealth coach. With automation, I can pack all that in within 5 hours each day.”

The average agent on Barry’s team sells 20 units per year on a normal 40 hour work week.

That’s a far cry from the vast majority of agents who sell an average of just 3 units per year or the ones who sell much more than that, but end up working 60 to 80 hours per week.

“Start replacing the things that are getting in your way. With tools like Follow Up Boss and Zapier, there is no reason you can’t buy back a significant amount of time in your business and personal life.”

We help you grow your real estate business with less hassle by putting all your leads and contacts in one simple system. We track your marketing and integrate with your website for lead prioritization. From there we help you manage all your follow up as well as incoming leads, texts and even phone calls so you can set more appointments.

Try it free for 14 days and fix your follow up. Friendly support available 7 days per week.

No items found.
Try Follow Up Boss Free For 14 Days